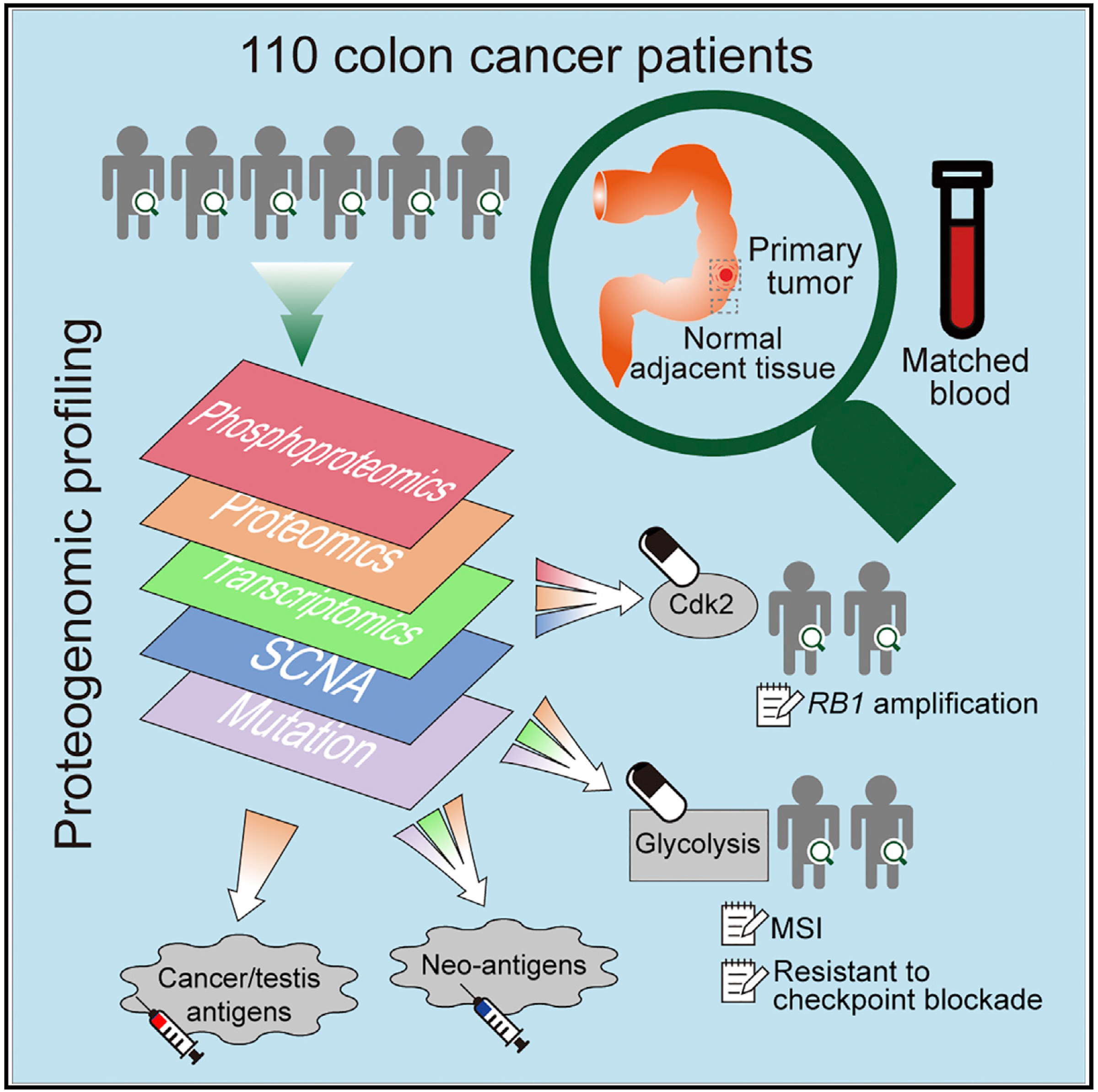 Analyzing both the entire set of genes and all the proteins produced by colon cancer tissues from patient samples has revealed a more comprehensive view of the tumor that points at novel cancer biological mechanisms and possible new therapeutic strategies. This multidisciplinary and multi-institutional study led by the National Cancer Institute Clinical Proteomic Tumor Analysis Consortium (CPTAC) researchers at Baylor College of Medicine published in the journal Cell, strongly supports comprehensive characterization of tumor tissues as a means to guide further research leading to early diagnostic strategies and new treatments.

“This is the first study that analyzed all the proteins and genes in tissue samples from a group of patients with colon cancer, comparing tumor and normal adjacent tissues,” said corresponding author Dr. Bing Zhang, professor of molecular and human genetics and the Lester and Sue Smith Breast Center at Baylor.

The team also included scientists from the Department of Energy’s Pacific Northwest National Laboratory, Vanderbilt University, Washington University, and the National Cancer Institute. Other corresponding authors of the paper are Dr. Tao Liu and Dr. Karin Rodland of PNNL and Dr. Daniel Liebler of Vanderbilt.

The team, as part of the National Cancer Institute Clinical Proteomic Tumor Analysis Consortium, generated the genomic and proteomic data and applied bioinformatics analyses to the data. The result is the first systematic catalog of the different proteins produced by colon cancer tumors and adjacent normal tissues.

“We were able to not only confirm previously described colon cancer molecular markers but also to uncover new differences between proteins produced by tumors and normal tissue that may be worth further study,” said Zhang, who also is a member of the Dan L Duncan Comprehensive Cancer Center and a McNair scholar at Baylor.

Furthermore, the researchers learned that genomic and proteomic data complement each other in ways that provide researchers with a better understanding of what goes on inside colon cancer cells.

“One example is SOX9,” Zhang said. “Our genomic data set indicated that SOX9 is a tumor suppressor gene because it is frequently mutated in colon cancer in ways that suggested that the function of the protein coded by the gene would be destroyed and that the protein would not be produced or produced in lesser amount. But when we looked at the proteomic data – at the actual protein in cancer tissue – we observed quite the opposite; SOX9 protein was quite abundant in these tumors, more than normal. The proteomic data thus challenged the indication that SOX9 was a tumor suppressor.”

“Analysis of the genes tells us what might possibly go wrong. But we don’t know exactly what actually has gone wrong until we analyze the proteins,” said Liu, whose team at PNNL performed the most detailed measurements of protein activity in colon cancer ever conducted as part of this study.

In addition to the example with SOX9, the team discovered other new interesting insights that can guide research to improve colon cancer treatments. For instance, the FDA has approved the use of a biological marker called DNA mismatch repair-deficiency for identifying patients who are candidates for a type of therapy called checkpoint inhibitor-based immunotherapy. However, only a subset of colon cancer patients with this biomarker respond to the therapy. Through bioinformatics analyses, Bing and his colleagues identified new clues regarding why immunotherapy does not work for all mismatch repair-deficient colon cancers that may lead to new therapeutic approaches.

“Our data revealed a surprising relationship between enzymes of metabolism and immune cells in some colon tumors, which presents a new opportunity to improve immunotherapies,” said Liebler.

The team has made all the data accessible to researchers in a web tool called LinkedOmics (http://linkedomics.org/cptac-colon), which also provides computational tools for further exploration of this dataset.

“We hope that this resource will be useful to researchers interested in investigating new aspects of colon cancer,” Zhang said.

This study was published in Cell.