Two new studies released July 9th, 2020 in Cell unravel the biology of lung adenocarcinoma (LUAD) using a suite of molecular techniques that, combined, provide a more complete picture of the disease than ever before. Using a diverse cohort of smokers and non-smokers, male and female, from around the world, researchers from the Clinical Proteomic Tumor Analysis Consortium (CPTAC) and the International Cancer Proteogenome Consortium (ICPC) draw out a clearer understanding of LUAD tumor progression, identify biomarkers, and propose alternative therapeutic targets.

Lung cancer is the most commonly diagnosed cancer worldwide and the leading cause of cancer-related deaths in both men and women in the United States. Despite the advent of improved drug therapies, the 5-year survival rate still remains below 20% because symptoms rarely show up until the cancer has spread to other parts of the body, making it extremely difficult to treat. 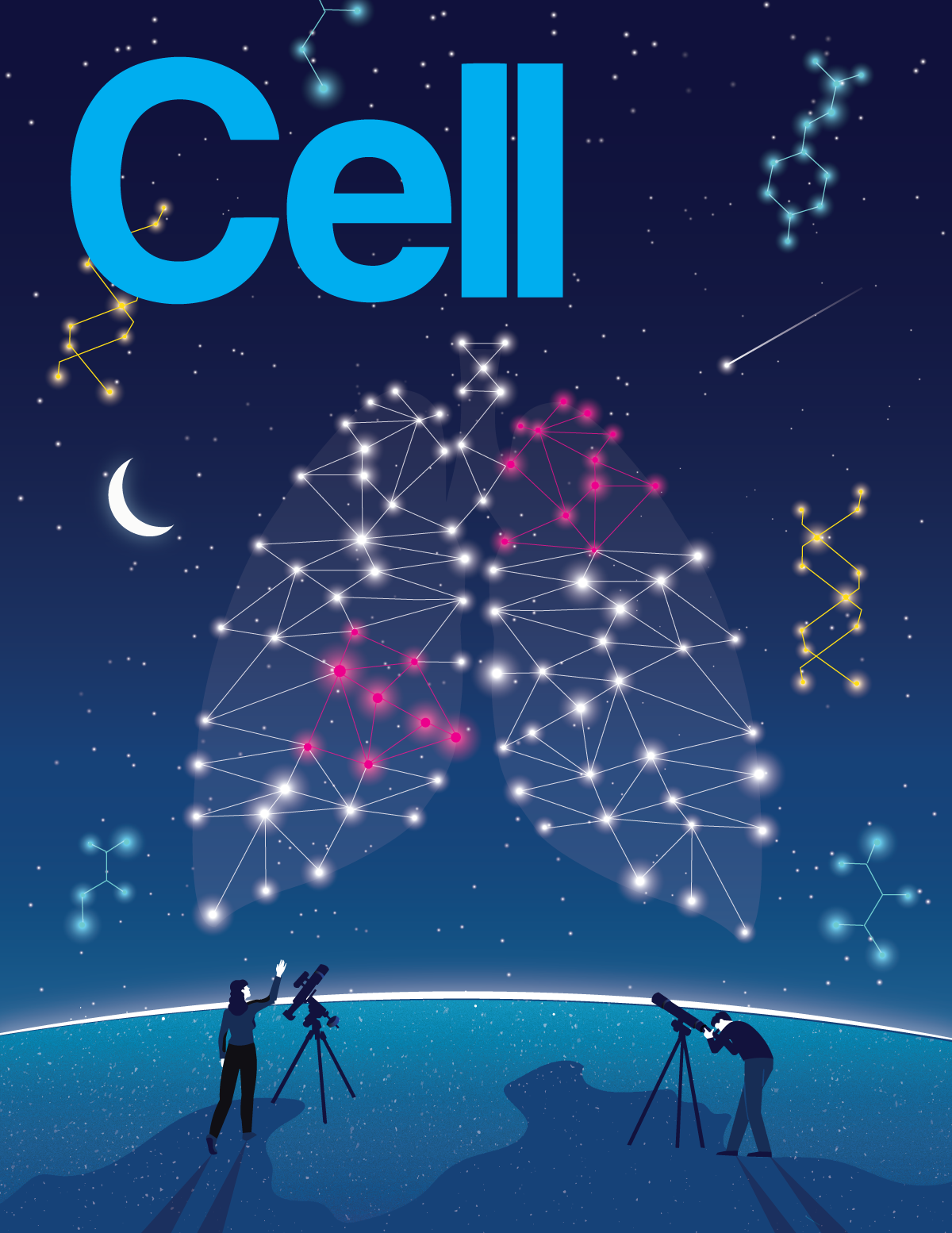 in the biology of LUAD, but comprehensive information about how various gene mutations lead to this disease is still lacking. CPTAC and ICPC investigators addressed this challenge by adding comprehensive proteomics to genomics, or proteogenomics, to reveal an additional dimension of lung cancer biology.

This collborative study was led by CPTAC investigators Drs. Michael Gillette, D. R. Mani and Steven Carr at the Broad Institute, along with Dr. Li Ding at the Washington University School of Medicine, in coordination with other CPTAC-associated institutions. Investigators focused on discovering novel and clinically relevant LUAD biology across tumor subtypes and stages. Studying tumor/normal matched tissue pairs from 110 LUAD patients, the group expanded the current understanding of LUAD molecular subtypes and characterized them by proteomic features, key driver mutations, countries of origin, and gender. This characterization ultimately led to the discovery of a fourth tumor subgroup and many differences in both oncogenic signaling and host tumor responses between them. Unique to the CPTAC dataset was the inclusion of almost equal numbers of smoking- and never-smoking-associated LUAD tumors. Comparison between these groups identified multiple biological pathways previously undetected by genomic analysis alone, including postulating ARHGEF5 as a potential targetable oncogenic mechanism in never-smokers.

Proteomics additionally provided many unique and important new observations. For example, the team reported high levels of activation of certain key proteins in tumors with ALK fusion, EGFR or KRAS driven mutations, and their downstream impact on the expression, phosphorylation and acetylation of several cancer-associated genes, as well as outlier kinase expression. These activated molecules are of high interest because they may be amenable to inhibition by therapeutic targeting. One extreme activation event worth noting was the phosphorylation of PTPN11 across ALK fusion- and EGFR mutation-driven tumors.  Data suggests that patients with these tumor features may benefit from therapy targeting PTPN11.

One confounding mechanism was observed in a subset of immune ‘hot’ tumors that the body had successfully identified and infiltrated with immune cells but did not attack. The investigators were able to untangle that these tumors had mounted their own defense, attracting immune-inhibitory cells that allowed the tumors to “hide” from the hosts defense system. Importantly, two immune evasion markers, IDO1 and CTLA4, were elevated in these tumors and led CPTAC researchers to suggest that the inhibition of these immune evasion mechanisms may allow for a more successful patient response to immunotherapy.

Molecular Signatures of Pathogenesis and Progression in East Asia

Although strongly associated with smoking, significant populations of never-smokers also develop lung cancer. While never-smokers account for approximately 20% of lung cancer patients in the United States, in Taiwan more than 50% of patients are never-smokers, and many with early onset of the disease. The high number of East Asian LUAD never-smokers presented an opportunity for the ICPC-Taiwan team, led by Drs. Yu-Ju Chen and Pan-Chyr Yang with colleagues from Academia Sinica, National Taiwan University, Taipei Medical University, Taiwan and The Institute of Cancer Research, UK, to take a closer look at the mechanisms of this disease in 103 East Asian patients with a focus on early stage.

Comparison of tumor/normal matched tissue pairs revealed strong associations between APOBEC mutagenesis and carcinogenesis.  The APOBEC family of RNA-editing enzymes function to make specific changes to transcripts and allow a single protein to operate differently in different organs.  In 74% of the younger female never-smokers (<60 years old) and all female patients without EGFR driver mutations in this study, researchers found high APOBEC mutational signatures, accompanied by high expression of APOBEC family enzymes and DNA repair/replication pathways upon combining proteomic and phosphoproteomic profiles. In addition, a correlation between high APOBEC signature and good response to immunotherapy was observed, making it a potential marker candidate for early stage diagnosis and immunotherapy treatment. However, in older females (>70 years old), mutagenesis derived from exposure of environmental carcinogens were found to be the prominent cancer drivers at early stages. Furthermore, proteomics showed additional evidences in the activated signaling in the metabolism and detoxification of chemical carcinogens, and pathways potentially causing tumor initiation, malignant progression and immune modulation in early carcinogenesis, suggesting that reducing carcinogen exposure from air pollutants and food preservatives maybe an effective strategy to improve lung cancer prevention.

Furthermore, proteomic characterization of the cohort stratified patients into five distinct subtypes, revealing a novel ‘late-like’ subtype (Stage 1B ‘late-like’) in patients with EGFR L858R mutations that display aggressive clinical features. Taiwanese patients have previously been shown to have a demographically distinct cancer genome mainly driven by two EGFR mutations: Del19 and L858R, the latter being associated with shorter survival outcomes and higher tendencies to develop malignant pleural effusion and metastasis without a clear mechanism. This study shows a molecular distinction between tumors with EGFR Del19 and L858R genetic mutations. These new findings suggest an early point of divergence in tumor phenotype where clinicians could identify high-risk patients to receive closer monitoring and possible adjuvant therapy. Early stage ‘late-like’ tumors also showed significant increases in MMP11, an enzyme that cuts away at the surrounding tissue, that may also serve as a strong early stage biomarker candidate.

“Proteogenomics helped identify demographically distinct signatures of oncogenesis and progression in never-smokers,” Dr. Yang said. “This approach has provided new insights on the management of early stage never-smokers with LUAD.”

Both these studies, CPTAC and ICPC, layer comprehensive multi-omic analysis to uncover findings that would otherwise remain disconnected. The discovery of new lung tumor biology and a continuous look at early stage LUAD development provides a significant boost to help develop strategies for detection and management.

“The collective findings of these studies are a result of using proteogenomics in research to produce an additional dimension to cancer biology and organizations working together to take on cancer, with a focus on patients as cancer knows no borders,” said Dr. Henry Rodriguez, Director of NCI’s Office of Cancer Clinical Proteomics Research.

These studies are a part of a series of studies supported by the National Cancer Institute’s (NCI’s) CPTAC and ICPC programs to fight cancer using proteogenomics and precision oncology. Previously published papers from these programs have focused on endometrial, kidney, breast, ovarian and colon cancers. Both studies have produced proteogenomic datasets that are available as a unique public resource for researchers and clinicians seeking to better understand and treat lung cancer.