Intrahepatic cholangiocarcinoma (iCCA) is the second-most common primary liver tumor and has a low 5-year survival rate of 15%. Treatment of iCCA is particularly difficult due to its markedly aggressive progression, late symptom presentation, and early metastasis. In order to improve patient prognoses, it is critical to understand the pathogenesis of iCCA more deeply and identify novel molecular pathways that may serve as a theoretical foundation for personalized treatment of the disease. Recently, a team led by researchers from Fudan University and the and Shanghai Institute of Materia Medica, Chinese Academy of Sciences in China collaborated with scientists from the National Cancer Institute's Clinical Proteomics Tumor Analysis Consortium (CPTAC) to develop the largest and most comprehensive proteogenomics dataset of iCCA to date.

This study, published in Cancer Cell, combines genomic, transcriptomic, proteomic and phosphoproteomic data from 262 patients to provide a more complete picture of the disease. By utilizing a proteogenomic approach, the team revealed molecular-based subgrouping, immunogenicity of fusion peptides, and pathway signals associated with driver genes—all of which might help understand the tumorigenesis mechanism and develop potential targets or immunotherapies for iCCA. Notably, this research also compliments previous research done by the same group in an effort to characterize HBV-related hepatocellular carcinoma (HCC). 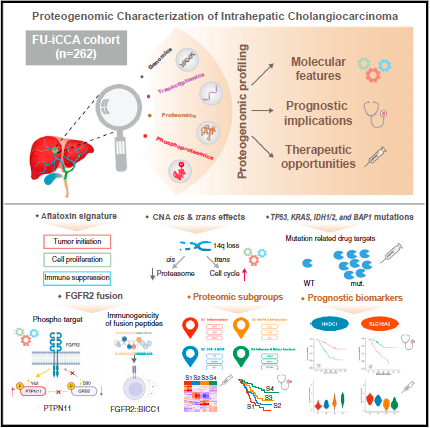 Based on the proteogenomics-focused data, the team defined four molecular subgroups of iCCA, including inflammation (S1), interstitial (S2), metabolism (S3) and differentiation (S4). Not only did their team reveal subgroup-specific clinical features, genetic alterations, tumor microenvironment, drug response, and prognosis, but they also achieved a better understanding of immune, metabolic and differentiation signals associated with each subgroup.

This study discovered that iCCA was primarily driven by the loss of function of the tumor suppressors TP53/BAP1 and oncogenic activation of KRAS/FGFR2/IDH1/2, two processes that were highly mutually exclusive. Patients who were revealed to have either TP53 or KRAS mutations had a poor prognosis, and their up-regulated proteins were typically enriched in the cell cycle and extracellular matrix-focal adhesion pathways, respectively. Furthermore, this study identified two markers for iCCA prognosis, HKDC1 and SLC16A3, that had the strongest positive and negative correlations with patient prognosis respectively. On the significance of these discoveries, Hu Zhou, the co-senior leader in Chinese Academy of Sciences wrote, “understanding how driver mutations affect protein expression and pathway activity may provide new insights into iCCA biology and therapeutic potential."

Another important finding was that nearly 10% of intrahepatic cholangiocarcinoma contained FGFR2 fusions--this suggests that some patients may benefit from FGFR2 inhibitors. The group investigated the immunogenicity of FGFR2 fusion-derived peptides and found that partial peptides could be presented by MHC complex and elicit the activation and expansion of specific T cells from healthy donors. “A deeper dive into the global antigen spectrum of iCCA may identify potential antigen targets and, in turn, lead to more precise immunotherapies for these iCCA patients” said Qiang Gao, a co-senior leader from Zhongshan Hospital at Fudan university.

By investigating these tissues via a proteogenomic lens, this research shed fresh light on iCCA. “Despite extensive tumor heterogeneity existing in iCCA, several major driver alterations… determine tumor regulatory patterns and prognosis, and reshape the tumor-microenvironment interaction,” according to the study leader Jia Fan, Ph.D., from Zhongshan Hospital, Fudan University, "In future clinical trials, we may stratify individuals based on particular biomarkers and design therapeutics that specifically target these drivers." The dataset generated by this study represents a unique resource for future research concentrating on iCCA.

This work was done under the auspices of a Memorandum of Understanding between the Shanghai Institute of Materia Medica of the Chinese Academy of Sciences, Fudan University, and the U.S. National Cancer Institute’s Office of Cancer Clinical Proteomics Research (OCCPR) through the Clinical Proteomic Tumor Analysis Consortium (CPTAC), as well as under the auspices of the US National Cancer Institute’s International Cancer Proteogenome Consortium (ICPC). The ICPC is a voluntary scientific organization that provides a forum for collaboration among some of the world's leading cancer and proteogenomic research centers. The ICPC brings together more than a dozen countries to study the application of proteogenomic analysis in predicting cancer treatment success and to share data and results with researchers worldwide, hastening progress for patients.