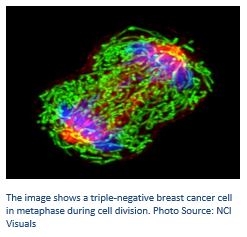 Breast cancer is the second most common cancer in women living in the United States, with triple-negative breast cancer (TNBC) accounting for approximately 15% of diagnoses. While chemotherapy is the standard-of-care in TNBC, resistance is common and associated with poor prognosis. Single agent PI3K (phosphoinositide 3-kinase) inhibitors have shown limited efficacy as a targeted therapy for TNBC, despite observed abnormal PI3K signaling in patients. CPTAC investigator Dr. Steven Carr and his research team at the Broad Institute analyzed a panel of patient-derived xenograft (PDX) models of TNBC with varying responsiveness to the pan-PI3K inhibitor buparlisib. The goal of the study was to identify cellular signaling events associated with sensitivity and resistance to buparlisib treatment.