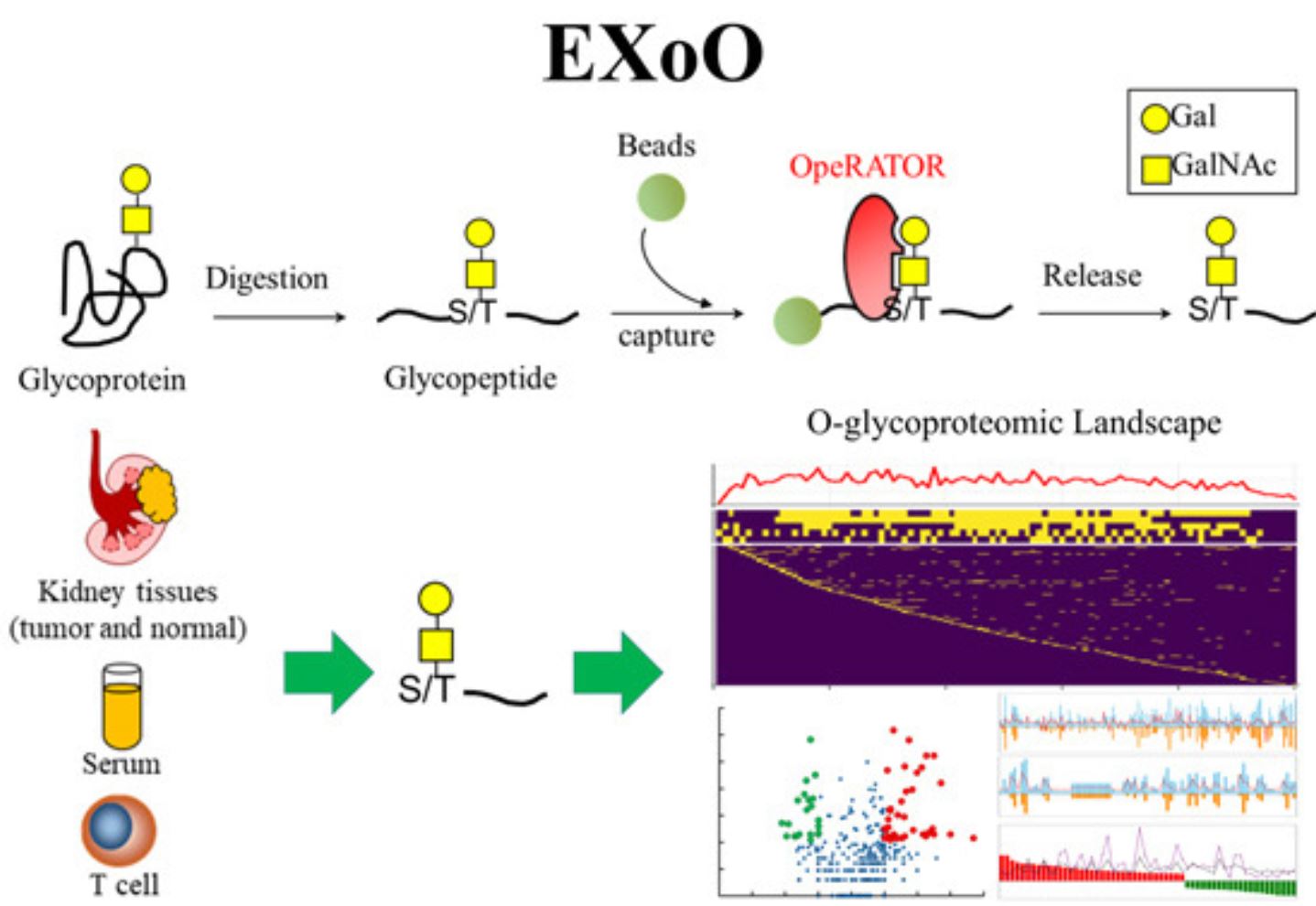 John Hopkins University School of Medicine have developed a technique to reliably identify o-linked glycosylation sites and site-specific glycans with core 1 structures.  Before you dust off your biochemistry textbooks, glycans are carbohydrate structures that are added to proteins post-translationally.  Those with a o-linked core 1 structures have a single GalNAc linkage on a serine or threonine residue, followed by a galactose molecule.  Because of the many carbohydrate combinations and cellular functions that glycans have, they are a challenge to study.

In their recent publication in Molecular Systems Biology, Dr. Hui Zhang, et.al., describe a new technique called EXtraction of O-linked glycopeptides, or EXoO, that uses an endopeptidase to cut o-linked glycans.  Briefly, the technique works by first generating peptides through digestion and attaching it to a solid agarose-resin support.  Next, using the OpeRATOR endopeptidase, these glycopeptides are cleaved at their o-linked glycosylation sites.  The OpeRATOR specifically cleaves the N-termini of serine and threonine residues where the o-linked, core 1 structure resides, leaving behind the new glycopeptides and its attached glycans.  Once released, the peptides are analyzed by LC-MS/MS.

The investigators first tested the technique on bovine fetuin – a protein with 6 known o-linked glycosylation sites – and proved to not only detect the existing sites with accuracy, but also found a previously unknown site at the serine residue 290.  This led Dr. Zhang and team to use EXoO to look at o-linked glycosylation in T-cells, human serum (also known to have many highly glycosylated proteins), and both normal and tumor human kidney tissue.  Researchers were able to verify the existing 2746, previously reported, o-linked glycosylation sites and also found 2580 more – a 94% increase – while providing large scale precision mapping with low false discovery rates.

Using the EXoO technique, investigators were able to find 56 o-linked glycoproteins that showed significant changes between normal and tumor kidney states.  Among them, versican core protein (VCAN), aggrecan core protein (ACAN) and finulin-2 (FBLN2), proteins implicated in tumor growth and metastasis through extracellular remodeling, showed large fold differences.  Also, large increases were noted in carbonic anhydrase-9 (CA9), angiopoietin-related protein-4 (ANGPTL4) and EGF-containing fibulin-like extracellular matrix protein-1 (EFEMP1) that may indicate an effect on tumor invasion.  These exciting findings and the advances in O-glycoproteome mapping points to the many unrealized layers of cancer biology still yet to be uncovered, but CPTAC researchers are diligently working to reveal them.