At present, typical treatment for patients with high-grade serous ovarian cancer (HGSOC) is surgical debulking coupled with platinum-based chemotherapy. Despite the majority of HGSOCs being sensitive to platinum-based therapy initially, most become resistant over the course of treatment. The development of more efficacious therapies for platinum-resistant disease is an urgent clinical goal. In order to more effectively combat HGSOC, researchers are striving to identify predictive biomarkers of platinum response. A recent investigation by CPTAC researchers, published December 2021 in Cell Reports Medicine, represents the first ever multiomic profiling of the dynamic response of cancer cells to platinum.

To understand mechanisms of platinum resistance and identify potential therapeutic targets in resistant HGSOC, the CPTAC team generated a data resource composed of dynamic carboplatin protein, post-translational modification, and RNA sequencing (RNA-seq) profiles from intra-patient cell line pairs derived from 3 HGSOC patients before and after acquiring platinum resistance. These proteomic profiles reveal extensive responses to carboplatin that differ between sensitive and resistant cells. Higher fatty acid oxidation (FAO) pathway expression is associated with platinum resistance, and both pharmacologic inhibition and CRISPR knockout of carnitine palmitoyl transferase 1A (CPT1A), which represents a rate limiting step of FAO, sensitize HGSOC cells to platinum. The results are further validated in a patient-derived xenograft (PDX) model, indicating that CPT1A is a candidate therapeutic target to overcome platinum resistance. When asked to highlight the importance of this work and their results, study leader Dr. Amanda Paulovich wrote,

“Remarkably, despite over 30 years of fantastic basic and translational research on platinum resistance, no predictive biomarker has been clinically translated to guide therapy, nor have strategies been developed to overcome resistance. In this study, we generate reproducible proteogenomic profiles (pre- and post-platinum treatment) of cell line and PDX models of human high grade serous ovarian cancers representing both platinum-sensitive and platinum-resistant disease. Since ~20% of all cancer patients who get chemotherapy are treated with a platinum compound, we are hopeful that the lessons learned from studying ovarian cancers might also apply more broadly to other tumor types.”

The team’s investigation revealed elevated expression of FAO metabolic pathway proteins in platinum-resistant versus platinum-sensitive cell lines. These results build on prior studies that showed that HGSOC cells depend on FAO during dissemination to metastatic sites in the peritoneal cavity or to survive in ascites. FABP4, a lipid transport protein in adipocytes, is a critical regulator of lipid responses in ovarian cancer cells1 co-cultured with adipocytes and is a determinant of metastatic potential in ovarian cancer2. CRISPR knockout of FABP4 in HGSOC cells reduced metastatic tumor burden in mice, and an FABP4 inhibitor increased the sensitivity of cancer cells toward carboplatin both in vitro and in vivo2. This suggests a potential for therapeutic use to help sensitize ovarian cancer cells to platinum. 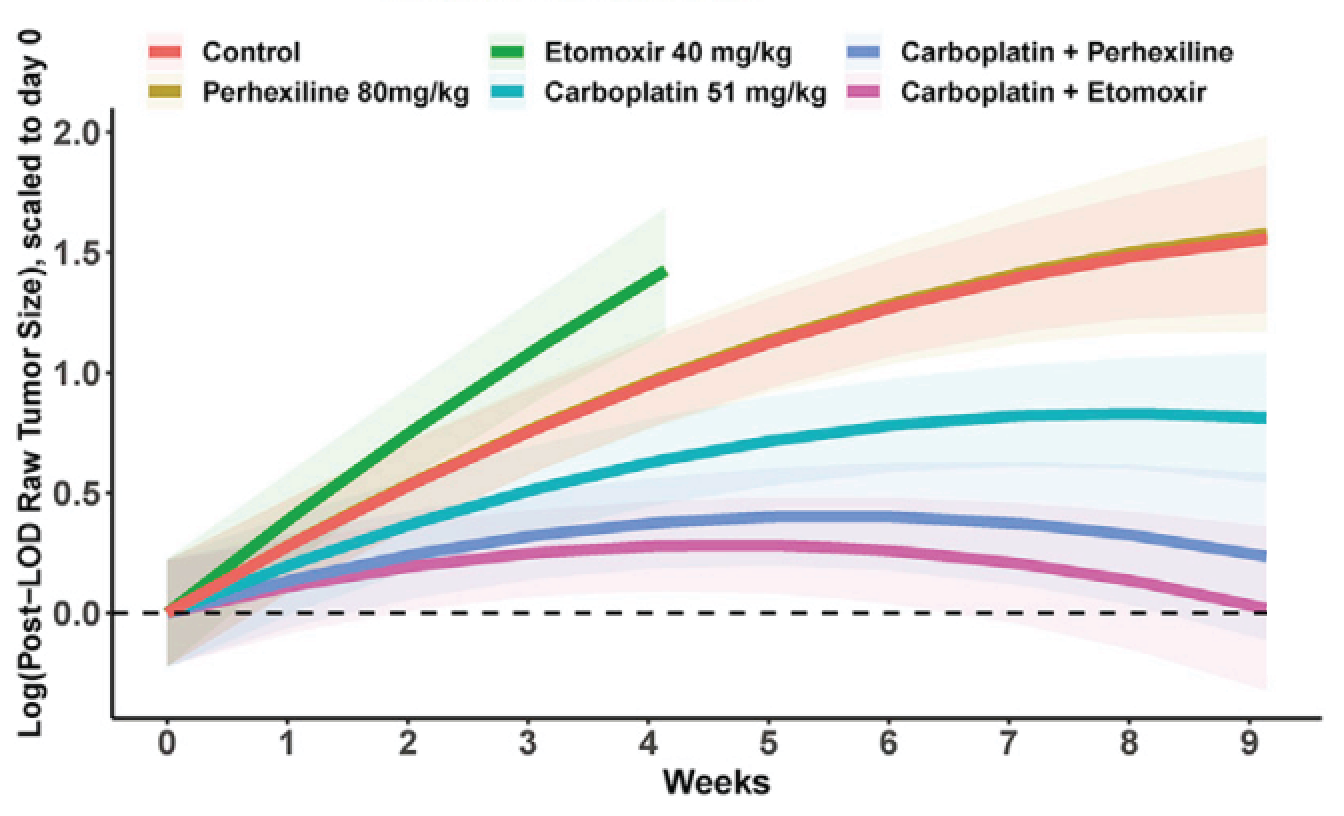 This figure shows the combination efficacy of carboplatin + CPT1A inhibitors in the platinum refractory HGSOC PDX model. Tumor area was monitored weekly by transabdominal ultrasound. Change in tumor size over time is plotted as the statistical model estimated average of all animals at each time point for a given treatment.

The CPTAC results complement and extend these prior findings by demonstrating that CRISPR knockout or pharmacologic inhibition of CPT1A, which catalyzes the rate limiting step in FAO, also sensitizes HGSOC cells to carboplatin. Additionally, their results demonstrate the effect of CPT1A expression on platinum sensitivity can be a cell autonomous trait. Previously, there had been experimental evidence supporting two different models of platinum resistance (i.e., cell autonomous versus extra cellular matrix (ECM) dependent) based on the association of increased FAO in resistant cells. Here, CPTAC researchers describe a convergence of evidence for the two models. This finding has profound implications for therapeutic intervention; treatments targeting the ECM to disrupt FAO-inducing signals may not work in tumors in which increased FAO is an intrinsic property of the cancer cell and vice versa.

All data generated by the CPTAC team for this study are publicly available, and the results can be visualized via a searchable database with an intuitive gene-query user interface, including links to databases providing additional gene and pathway-level information (https://sites.google.com/view/ptrc-cell-line).