June 29, 2016 — In what is believed to be the largest study of its kind, scientists at Johns Hopkins University (JHU) and Pacific Northwest National Laboratory (PNNL) led a multi-institutional collaborative project that comprehensively examined the collections of proteins in the tumors of 169 ovarian cancer patients to identify critical proteins expressed by their tumors. By integrating their findings about the collection of proteins (the proteome) with information already known about the tumors’ genetic data (the genome), the investigators report the potential for new insights into the progress of the most malignant form of the disease. The work, which details an approach known as proteogenomics, is published June 29, 2016, in the advance online edition of Cell (http://www.cell.com/cell/home). 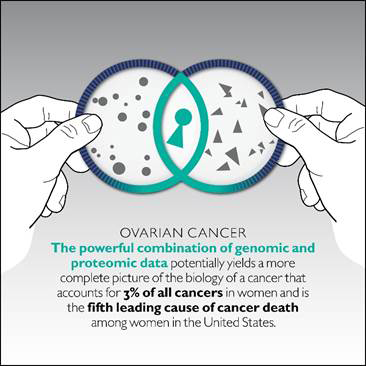 The researchers say their achievement illustrates the power of combining genomic and proteomic data (“proteogenomics”) to yield a more complete picture of the biology of a cancer that accounts for three percent of all cancers in women and is the fifth leading cause of cancer deaths among women in the United States.  Daniel W. Chan, a professor of pathology and oncology who led the team at the Johns Hopkins University School of Medicine, said, “Correlating our data with clinical outcomes is the first step toward the eventual ability to predict outcomes that reflect patient survival, with potential applications for precision medicine and new targets for pharmaceutical interventions.  But just like anything in medicine, clinical validation will be a long and rigorous process.”

“Historically, cancer’s been looked at as a disease of the genome,” said Karin Rodland, chief scientist for biomedical research who led the team at the Pacific Northwest National Laboratory, a U.S. Department of Energy laboratory.  “But that genome has to express itself in functional outcomes, and that’s what the proteomic data adds, because proteins do the actual work of the genome.”  The authors say that with the findings, researchers expect to be better able to identify the biological factors defining the 70% of ovarian cancer patients who suffer from the most malignant form of ovarian cancer, called high-grade serous carcinoma. Currently, only one in six such patients will live five or more years beyond diagnosis.

The power of collaboration
The work draws on the efforts of physicians, scientists and patients who have worked together to understand ovarian cancer.  The investigators say the effort requires collaboration among physicians as well as patients willing to take part in research to benefit others with the disease or even to prevent others from ever developing cancer.  Under the leadership of the National Cancer Institute, scientists around the nation have worked together to create The Cancer Genome Atlas (TCGA), a collaborative effort to map cancer’s genetic mutations.  The task for ovarian cancer was completed in 2011.  In the current study, the PNNL and JHU teams each studied subsets of 169 high-grade serous carcinoma tissue samples and accompanying genomic and clinical data drawn from that study.

The Johns Hopkins team initially selected 122 of the samples based on those tumors’ ability to repair damaged DNA – known as homologous recombination deficiency – and characterized by changes in genes including BRCA1, BRCA2 and PTEN, mutations long linked to increased cancer risk and severity.  “We chose to examine these samples because patients with changes in these genes already are benefiting from a specific drug regimen for breast cancer, so if we could find similar changes in ovarian cancer genomes and proteomes, those patients would likely benefit from the same regimen,” said Chan, a professor of pathology and oncology at JHU.  The PNNL team initially selected 84 samples based on overall patient survival times.  “We examined the data for the shortest-surviving patients and the longest-surviving patients hoping to pinpoint biological factors associated with extremely short survival or better-than-average, longer survival,” said Rodland.

Then, through their participation in the Clinical Proteomic Tumor Analysis Consortium (CPTAC), another program of the National Cancer Institute which funded both teams, the two groups combined their efforts.  Using protein measurement and identification techniques based on mass spectrometry, the teams identified 9,600 proteins in all the tumors, and pursued study on 3,586 proteins common to all 169 tumor samples.

Beyond the genome
While many people are familiar with the role our genes play in the development of cancer, the genes are often just a starting point, for patients and researchers alike.  Genes are transcribed into RNA, the genetic material that makes proteins, which are the workhorses of cells.  The activity of the proteins varies dramatically, with many undergoing changes that affect their impact and interactions with other proteins.

A detailed look at the activity of proteins in cancer biology gives researchers insight into specific molecular events that would otherwise remain unknown. A hallmark of cancer, and particularly high grade serous carcinoma, is when genetic instructions go awry.  One form is the appearance of more copies of certain regions of the genome.  These so-called copy number alterations can lead to changes in protein abundance.  When the researchers compared known regions of copy number alterations, they found that parts of chromosomes 2, 7, 20 and 22 led to changes in abundance of more than 200 proteins.  A more careful study of those 200 proteins revealed that many are involved in cell movement and immune system function, both processes implicated in cancer progression, the researchers said.

“Adding the information about the proteome on top of the genome provides an entirely new dimension of information that has enabled the discovery of new biological insights to ovarian cancer, while creating a valuable resource that the scientific community can use to generate new hypotheses about the disease, and how to treat it,” said Rodland.

“High grade serous carcinoma is such a challenging disease, requiring complex clinical care to achieve long-term survival.  This new knowledge gives us new directions to test in the lab and clinic,” said study author Douglas A. Levine, MD, director of gynecologic oncology at the Laura and Isaac Perlmutter Cancer Center of NYU Langone Medical Center.  “This proteogenomic analysis will help us improve patient outcomes and quality of life.”

About Pacific Northwest National Laboratory
Interdisciplinary teams at Pacific Northwest National Laboratory address many of America's most pressing issues in energy, the environment and national security through advances in basic and applied science.  Founded in 1965, PNNL employs 4,400 staff and has an annual budget of nearly $1 billion.  It is managed by Battelle for the U.S. Department of Energy's Office of Science. For more information on PNNL, visit the PNNL News Center, or follow PNNL on Facebook, Google+, LinkedIn and Twitter.

About New York University Langone Medical Center
NYU Langone Medical Center, a world-class, patient-centered, integrated academic medical center, is one of the nation's premier centers for excellence in clinical care, biomedical research, and medical education.  Part of NYU Langone is NYU School of Medicine, which since 1841 has trained thousands of physicians and scientists who have helped to shape the course of medical history, and the Laura and Isaac Perlmutter Cancer Center, a National Cancer Institute–designated cancer center.  For more information, go to www.NYULangone.org, and interact with us on Facebook, Twitter, YouTube, Instagram, and Google+.

About Stanford University School of Medicine
A leader in the biomedical revolution, Stanford Medicine has a long tradition of leadership in pioneering research, creative teaching protocols and effective clinical therapies.  Its close proximity to the resources of the university - including the Schools of Business, Law, Humanities and Sciences, and Engineering, its seamless relationship with its affiliated adult and children’s hospitals, and its ongoing associations with the entrepreneurial endeavors of Silicon Valley, make it uniquely positioned to accelerate the pace at which new knowledge is translated into tangible health benefits.  For more information, go to http://med.stanford.edu.

About University of California at San Diego
The University of California San Diego is a student-centered, research-focused, service-oriented public institution that provides opportunity for all.  Recognized as one of the top 15 research universities worldwide, a culture of collaboration sparks discoveries that advance society and drive economic impact.  For more information, go to https://ucsd.edu.

About Virginia Polytechnic Institute and State University
Virginia Tech takes a hands-on, engaging approach to education, preparing scholars to be leaders in their fields and communities.  As the commonwealth’s most comprehensive university and its leading research institution, Virginia Tech offers 240 undergraduate and graduate degree programs to more than 31,000 students and manages a research portfolio of more than $513 million.  For more information, go to http://www.vt.edu.

About National Cancer Institute’s CPTAC
The National Cancer Institute’s Clinical Proteomic Tumor Analysis Consortium (CPTAC) is a comprehensive and coordinated effort to accelerate the understanding of the molecular basis of cancer through the application of large-scale proteome and genome analysis technologies (proteogenomics) to different cancer types.  CPTAC is composed of expertise in proteomics, genomics, cancer biology, oncology and clinical chemistry, while creating open community resources that are widely used by the cancer community.