Lung cancer remains the leading cause of cancer-associated death in the United States and worldwide. Patients with a subtype called lung adenocarcinoma (LUAD) have benefited from the development of new targeted medicines, but the search for effective new therapies for another subtype called lung squamous cell carcinoma (LSCC) has largely come up short.

To learn more about the biological basis of LSCC, a team led by researchers from the Broad Institute of MIT and Harvard and the National Cancer Institute's Clinical Proteomics Tumor Analysis Consortium (CPTAC), including collaborators from the Baylor College of Medicine, have developed the largest and most comprehensive molecular map to date of LSCC. Their effort, described in Cell, brings proteomic, transcriptomic, and genomic data together into a detailed "proteogenomic" view of LSCC. Analysis of that data has revealed potential new drug targets, immune regulation pathways that might help the cancer evade immunotherapies, and even a new molecular subtype of LSCC. Data from the study is available on the CPTAC portal. 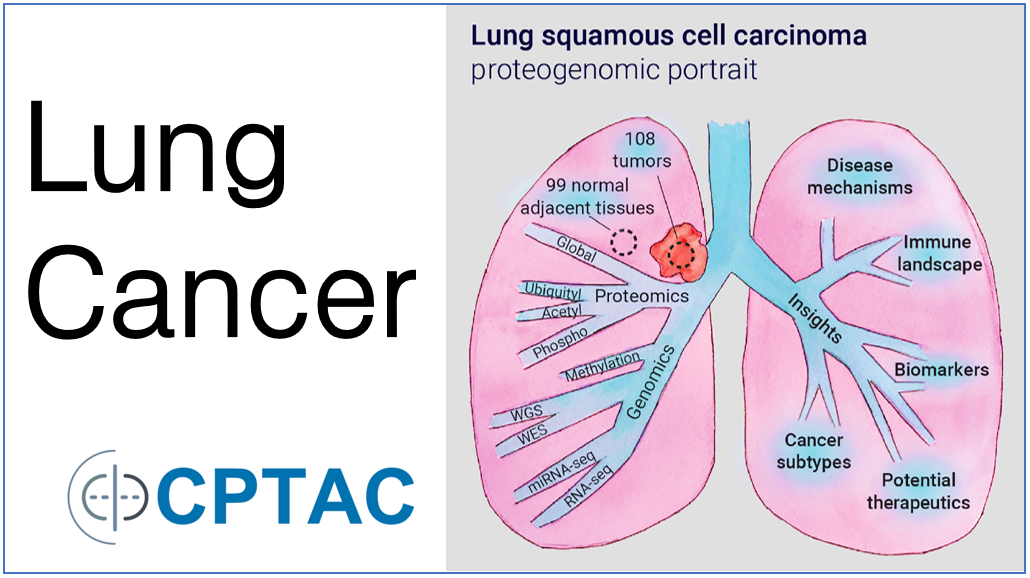 "Patients with lung squamous cell cancer have very limited therapeutic options, and even modest success in understanding this disease could make a difference in people's lives," said Shankha Satpathy, a group leader in the Broad Institute's Proteomics team, and co-first and co-corresponding author on the Cell study with co-first authors Karsten Krug and Pierre Jean Beltran of Broad and Sara Savage of Baylor. "We hope the research community, from basic scientists to practicing oncologists, will make use of this new resource for testing hypotheses, stimulating further research, and opening new data-driven avenues for clinical trial design that, in the long run, could benefit patients."

Targetable opportunities
In their study, the team analyzed DNA, RNA, proteins, and post-translational protein modifications (PTMs, i.e., phosphorylation, acetylation, and ubiquitylation) of 108 tumors before treatment, and compared them with normal tissue. Among the opportunities they saw for the development of new LSCC treatments, the researchers identified the gene NSD3 as a possible target for tumors harboring extra copies of FGFR1, another gene that is often duplicated or amplified in LSCC. Prior efforts have attempted, unsuccessfully, to target FGFR1 directly. The team's proteogenomic findings suggest that NSD3 could be a critical driver of tumor growth and survival in these tumors, making it a potential therapeutic target.

They also noted a subset of patients whose tumors exhibited low expression of p63 but high expression of survivin, a protein that regulates cell proliferation and cell death and which is the target of clinical trials in other tumor types.

Additionally, the team's data suggested that tumors driven by overexpression of the transcription factor SOX2 may be vulnerable to treatments directed against chromatin modifiers such as LSD1 and EZH2. SOX2 itself is generally considered an "undruggable" target; the team's observations point to an opportunity to develop a therapeutic workaround.

"Proteomic and PTM data help us to see the functional effects of the genome," explained Michael Gillette, a senior group leader in Proteomics at Broad, an attending physician in pulmonary and critical care medicine at Massachusetts General Hospital, and a co-senior author on the study with Steven Carr and DR Mani of Broad and Bing Zhang of Baylor. "Understanding which protein levels are impacted by copy-number alterations, and how mutations impact protein expression and pathway activity, provides deeper insights into cancer biology.

"Often those insights hint at unexplored therapeutic options, or at specific subpopulations that might benefit from specific treatments," he added. "This is especially important with a disease like LSCC, where so many clinical trials have failed."

Immune explorations
Even though immunotherapy represents the greatest advance in LSCC therapy in decades, patient outcomes lag behind those seen with LUAD; only a minority of patients with LSCC exhibit long-term responses. Based on their proteogenomic data, the team presented a detailed picture of the immune landscape of LSCC, highlighting several immune regulation pathways that could serve as targetable points. In particular, their analysis highlighted a subset of tumors that exhibit markers associated with response to immune checkpoint inhibitors (such as PD-1/PD-L1 blockers), and with immune evasion, providing some clues as to why immunotherapy outcomes are so uneven across patients with LSCC.

“A deeper understanding of the immune landscape of LSCC tumors could eventually lead to more effective immunotherapies and markers for patient stratification,” said Zhang, a professor in the Lester and Sue Smith Breast Center and the Department of Molecular and Human Genetics at Baylor.

Metabolic dysregulation and crosstalk revealed
Ubiquitylation is a process by which the cell flags proteins with another small protein called ubiquitin (or its biochemical relatives) to target them for destruction. While this process is important in normal function, when dysregulated it can contribute or lead to disease. The Broad team previously developed UbiFast, a technology that enables deep-scale, high-throughput analysis of ubiquitylation in patient tissue samples. Applied to LSCC, UbiFast revealed complex regulation of metabolic pathways such as glycolysis and oxidative stress driven by molecular crosstalk based on ubiquitylation (or ubiquitin-like modifications) and two other forms of protein modification, phosphorylation (which changes a protein's enzymatic or catalytic activity) and acetylation (which can affect a protein's structure, activity, localization, and stability).

A new subtype emerges
Prior efforts have identified four molecular subtypes of LSCC using genomics, corresponding to distinct cell types and processes. With their proteomic perspective, the research team not only gained a deeper understanding of immune, metabolic and proliferative signals associated with these subtypes, but also uncovered a new epithelial-to-mesenchymal transition subtype. The cells of this new type, they noted, may have greater potential for metastasis, but also feature active, kinase-driven molecular pathways that could be targeted therapeutically.

“This is remarkable because LSCC tumors generally lack the types of kinase alterations present in LUAD that have been the basis for development of a broad spectrum of therapeutic inhibitors,” said Ana Robles, program director in NCI’s Office of Cancer Clinical Proteomics Research.

The study collaborators performed their work under the auspices of CPTAC, an NCI-sponsored, multidisciplinary/multi-institutional effort to accelerate the understanding of the molecular basis of cancer through the application of large-scale proteogenomic analysis. This work builds on prior studies by CPTAC and the International Cancer Proteogenomics Consortium on LUAD. All datasets generated by CPTAC (genomics, proteomics, and medical images) are available to the research community as a unique public resource that provides an exceptional foundation to guide further research and support development of therapeutic modalities in LSCC and other cancers.

“Studies like ours and others from the CPTAC network and beyond are increasingly demonstrating the importance of undertaking multi-omic, integrative analyses of tumors in order to provide a more detailed and nuanced understanding of cancer," said Carr, senior director of Proteomics at Broad. "These studies have already revealed new, previously unrecognized targets for therapeutic intervention."